Mines and Money London: “Copper demand is going to be psychedelic!” 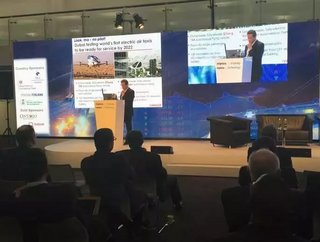 Shooting from the hip, and holding forth on everything from the China-US trade war to global warming, the serial entrepreneur predicted the rise of electric vehicles (EVs) will be a huge opportunity for the mining industry and investors: “Copper demand is going to be psychedelic!”

The numbers back up the self-confessed “ex-hippy” and his predictions for an exponential rise in demand. The average petrol engine vehicle requires 20kg of copper, a hybrid 40kg, and a plug-in EV 109kg, while the cars of the future will need as much as 163kg of the metal. EV sales are expected to rise from 2 million units in 2018 to 21 million units by 2030.

Several long-term trends are driving growth in copper demand and are expected to amplify in the coming decades. Along with the wider uptake of EVs, the boom in consumer electronics, the increased use of renewable energy sources and energy efficiency - coupled with the need for battery storage solutions - all require significant amounts of copper to function. The World Bank’s 2017 report, “The Growing Role of Minerals and Metals for a Low Carbon Future”, suggests we could see a ten-fold rise in demand for technology metals like copper, by 2050.

The rise of copper will herald “the revenge of the miners” declared Friedland, whose no-nonsense appraisal of the industry’s likely inability to meet demand for the strategic metal had the packed auditorium hanging on his every word.

“Human beings wanting everything, all of the time and moving to cities will drive that growth in demand,” he said, alluding to the opportunity for the industry to make a positive contribution to the fight against air pollution and the quest for net-zero emissions.

“Copper is rare and hard to find, but without it we don’t have a modern world… Lithium-ion batteries are made out of copper guys. So, when we start moving fully to electric vehicles we’re going to need a telescope to actually see the copper price… The big giga factories are coming… the industrial revolution starts in 2023 and it just builds for the rest of the decade.”

Highlighting that solar energy solutions are also copper intensive, Friedland pointed out that heightened demand would come from wind turbine manufacturers. Global’s expanding fleet is expected to consume more than 5.5 million tonnes of the metal by 2028 with renewable energy sources now supplying America’s grid with 18% of its electricity. Friedland also highlighted that, allied to demand for copper, nickel and cobalt will be vital for energy storage solutions.

Copper sends a message to markets that growth is already wrecked, reports Bloomberg

Billed by Mines and Money as “the world’s leading mining entrepreneur”, for over 25 years, Robert Friedland has been recognised by the leaders of the international financial sector and mineral resources industries as a successful explorer, technology innovator and company builder. In 1999 his company, Ivanhoe Mines, discovered the Oyu Tolgoi copper gold deposit in Mongolia.

Friedland is the Founder, Executive Co-Chairman and Non-Independent Director of Ivanhoe Mines, a Canadian mining company now focused on advancing its three principal projects in Southern Africa: the development of new mines at the Kamoa-Kakula copper discovery in the Democratic Republic of Congo (DRC) and the Platreef platinum-palladium-nickel-copper-gold discovery in South Africa; and the extensive redevelopment and upgrading of the historic Kipushi zinc-copper-germanium-silver mine, also in the DRC. Ivanhoe also is exploring for new copper discoveries on its 100%-owned exploration licences in the DRC, near the Kamoa-Kakula Project.

Mines and Money London is in its 17th year and established as Europe’s leading mining event. More than 2,000 delegates are in attendance to share insights and network with 150 mining companies ranging from exploration juniors to established producers and majors. The event runs through to Wednesday 27 November.