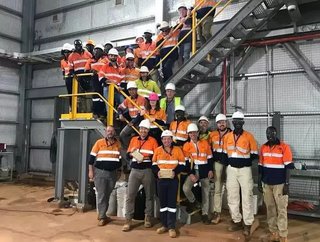 Endeavour Mining Corporation has completed its first gold pour at its new Houndé Gold Mine in Burkina Faso on October 18, 2017, ahead of schedule and b...

Endeavour Mining Corporation has completed its first gold pour at its new Houndé Gold Mine in Burkina Faso on October 18, 2017, ahead of schedule and below budget.

Sébastien de Montessus, President & CEO, stated: "We are proud to have successfully completed this major milestone ahead of schedule and below budget, with an exceptional safety record of over 6.5 million hours without a lost time injury. The addition of Houndé will significantly improve Endeavour's portfolio quality as it is expected to double the group's cash flow generation once fully ramped-up.

As we approach commercial production, I would like to acknowledge the hard work of our in-house construction team for successfully delivering Houndé and for their focus on diligently pushing forward our high-quality project pipeline. Most of the team has already transitioned to the Ity CIL project in Ivory Coast where construction is well underway.

Strong results for Algold Resources at Tijirit Project in Mauritania

As previously announced, the first ore was introduced into the processing plant on September 25, 2017. Since that date, Endeavour has successfully processed approximately 65,000 tonnes of ore. Commercial production is expected to be declared in the coming weeks as the nameplate capacity through the crushing, milling and CIL circuits has already been reached and performance trial testing will soon commence.

Mining activities at the Main Vindaloo open pit are progressing well with nearly 3-months worth of feed already stockpiled and positive grade reconciliation against the resource model being achieved. The current stockpile totals 620,000 tonnes at 2.9 g/t containing 57koz, inclusive of 130,000 tonnes at over 5.0 g/t. Resettlement compensation for communities living near the high-grade Bouere and Dohoun satellite deposits has commenced, with mining activities scheduled to commence in late 2018.

Exploration drilling, which resumed in early 2017 following a two year period of inactivity, has confirmed the occurrence of high-grade mineralization at the nearby Kari Pump and other targets, with the initial results expected to be published in the coming weeks.