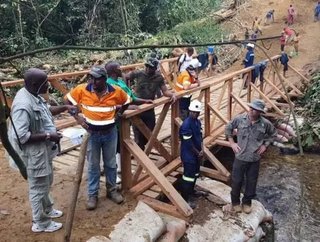 Alphamin Resources has the backing of the North Kivu Government in its flagship Bisie Tin Project, the company has revealed. A committee has been estab...

Alphamin Resources has the backing of the North Kivu Government in its flagship Bisie Tin Project, the company has revealed.

A committee has been established by the North Kivu Government to support Alphamin subsidiary, Alphamin Bisie Mining (ABM) S.A. to develop the Bisie tin project. ABM will develop the Bisie Tin Project with plans to begin full production in 2019.

North Kivu Governor Julien Paluku Kahongya signed the legal order in Goma on 20 December, 2016 creating the Committee to Accompany ABM in Implementing its Mine at Bisie (CAIMB in French) in order to both support ABM.

The CAIMB is composed of high-level technical and specialised services who will help guide ABM for the three years of construction and initial operations. A branch of the CAIMB will be created in Walikale Territory to engage with local authorities in the same way.

Confirming the Province's strong commitment to promoting private investment and public-private partnership in North Kivu, Governor Julien Paluku stated: “The provincial government is committed to providing a favourable environment for private investment in a win-win partnership. We affirmed this in two economic forums of the province held in 2010 and 2015. North Kivu has indeed an enormous economic potential to exploit for the benefit of its population. We must support Alphamin, so that other investors in the mining, agriculture, energy and tourism sectors are reassured to follow the example and invest responsibly."

The North Kivu provincial minister in charge of mines, Professor Anselme Kitakya, who is responsible for the smooth operation of the CAIMB, adds: "Alphamin is already demonstrating the importance of partnership with the government of North Kivu by co-financing the rehabilitation of the Sake-Masisi-Walikale road for approximately 230 km and through the contribution to social development within the framework of the Lowa Alliance, a non-profit foundation initiated by the populations that will be supported by the mining project that develops ABM in the territory of Walikale. Socio-economic infrastructures will be erected in the area surrounding the Bisie mining site. We are committed to providing support and advice to investors such as ABM."

Alphamin CEO Boris Kamstra commented, “North Kivu has many assets and remarkably industrious people, from which past events have diverted investors’ attention. This is a very encouraging sign and helps us in our role as ambassadors for North Kivu to global investors to convey the support of government, nationally, provincially and locally which will assist Alphamin with the development of our Bisie Tin Project.”

Read our exclusive interview with Boris Kamstra on all things Alphamin, North Kivu and the lasting legacy of the Bisie Tin Project.

Richard Robinson, Managing Director of ABM, echoed these sentiments: “As the Bisie Tin Project moves forward in road and preliminary construction activities, including the ventilation tunnel, we are seeing increasing support from local and national stakeholders through actions such as that of the North Kivu Governor.  This reinforces the progress made by Alphamin in 2016 with the signing of a collaborative Memorandum of Understanding with the Walikale Community in April and June, 2016, followed by concrete social development projects such as the construction of the new Luuka Primary School and the formal founding and registration of the Lowa Alliance, as well as partnerships with North Kivu and the national road agency in rehabilitating the Masisi Walikale road.”

It is anticipated that ABM will employ approximately 700 people during construction and will create approximately 450 permanent local jobs during operations. As a result, significant economic benefits are expected in an area of the DRC that has seen little foreign investment while overcoming security and governance challenges for decades. The mine is estimated to produce 10,000 tonnes of tin in concentrate on average per year over the 12-year mine lifespan, which represents about 3% of the world’s current production and will double the DRC’s current tin exports.  Alphamin and North-Kivu actors understand the project will serve as an example for foreign investment and will also serve as an infrastructure platform for other businesses to start, including service providers to the mine.  Indirect job creation will be far higher than the mine's direct numbers and can be reasonably expected to achieve the 1:14 ratio of indirect jobs commonly reported in Africa for similar projects, resulting in potentially an additional 6,300 jobs.