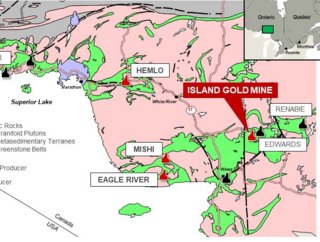 Alamos Gold's Phase 3+ expansion study of the Island Gold Mine in Ontario raises operations to 2,400 tonnes per day

John A. McCluskey, President and CEO, said the planned Phase 3+ expansion drives the value of Island Gold to $2bn at current gold prices with an after-tax net present value of $1.6bn, up 25%.

Mineral Reserves and Resources have increased to 5.1mn, taking the 18-year mine life to 2039, a four year increase from the P3 2000 Study.

"As a producing mine with a well-understood cost structure, this expansion is low risk from an execution perspective, and has a significantly reduced carbon footprint," he said.

"The exploration story continues to unfold with a Mineral Reserve and Resource base that has nearly tripled over the past four years, and with the deposit open laterally and down-plunge, we expect Island Gold will be one of the lowest cost and most profitable mines for decades to come."

The third phase expansion is slated to be completed by Q1 2026.