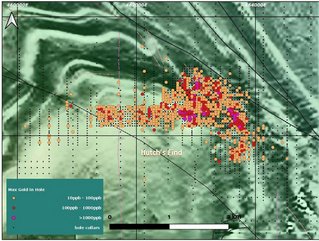 Hamelin Gold, the Australian mineral resources exploration company, has announced the results from an RC drill programme completed at the Hutch’s Find prospect in the West Tanami Gold Project in Western Australia.

Hamelin said that the Hutch’s Find gold prospect is defined by a 2.5-km-long regolith gold anomaly located 22-km southwest of the Coyote Gold Mine. Historical exploration at the prospect is dominated by shallow RAB, aircore and RC drilling with very few localised deeper RC and diamond holes and a single wide spaced RC programme completed in 2019, it added.

Hamelin recently completed an orientation drill traverse at Hutch’s to determine the effectiveness of surface sampling techniques in areas of transported cover, the company said. The RC drilling was conducted to provide key geological information on the nature of the regolith and basement geology and assess the stratigraphy to the east of the mineralised position, it continued.

A single east-west drill line was completed by Hamelin over the eastern edge of the gold anomaly defining the Hutch’s Find gold prospect. The western five holes in the line (TLR0001 – TLR0005, see Figure 1) were drilled at 100-metre spacing with the remaining holes on the line spaced at 200-metre increments to the east.

The five western holes centred on an area where historical drilling had previously intersected high grade gold mineralisation, with a best intercept recorded of 10 metres at 5.4 g/t from 123 metres (HFDD0004).

Commenting on the Hutch’s Find RC drill results, Hamelin Gold Managing Director Peter Bewick said: “The discovery of shallow, high grade gold mineralisation in our first drill programme at Hutch’s Find is an outstanding result. The West Tanami project contains a suite of multi-kilometre scale near surface gold anomalies that have seen limited deeper drilling. Hamelin has conducted a first pass programme of diamond and RC drilling at six of our priority prospects in our first field season to understand the geological and structural setting associated with these large anomalies.

“A 2,000 metre RC drill programme planned to follow-up on mineralisation at the Camel Prospect is due to commence by the end of October. This programme has been expanded to include additional drilling at Hutch’s Find targeting extensions to the high-grade gold intersected in TLR0001.”

RC hole TLR0001 was collared 200 metres west of HFDD0004 and is interpreted to have intersected a new, potentially steeply dipping mineralised structure. The area immediately around TLR0001 was previously only drilled by 12 metre deep, 40 metre by 40 metre spaced vertical RAB holes, the statement continued.

These results confirm Hamelin’s belief that the systematic exploration of the belt scale West Tanami Project has the potential to deliver high grade gold discoveries in areas of ineffective shallow drilling, the statement concluded.