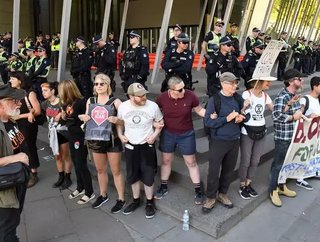 Organisers of the International Mining and Resources Conference (IMARC) have condemned protest violence outside the conference venue. “We fully suppo...

Organisers of the International Mining and Resources Conference (IMARC) have condemned protest violence outside the conference venue.

“We fully support the right of people to protest peacefully and lawfully,” an IMARC spokesperson said.

“Security considerations have been important for each of the IMARC conferences and we do not condone the level of violence that we have seen in the past two days.

“Safety of our delegates and attendees will always be our first priority. We continue to take guidance and advice from the Victoria Police and other agencies to ensure those attending our conference can do so without being disrupted or subjected to violence. We feel for the thousands of people in Melbourne who have been caught up in the protests.

“We also want to extend our appreciation to the 7,000 delegates who have attended the conference during the past few days, some being exposed to unnecessary anti-social behaviour and taunts as they enter the building.

"We are reassuring our international delegates that this does not represent Melbourne’s renowned hospitality. Our delegates have responded with respect, professionalism and restraint, under particularly trying circumstances. We thank them for upholding the integrity of the mining industry. We will continue to follow the advice of Victorian Police to maintain safe access to and from the conference.”

The announcement from IMARC follows two days of protests outside the conference centre in Melbourne where a dozen climate change protesters were arrested on day two while several activists glued themselves to the ground.

Victoria Police used capsicum spray to break up the blockade on Wednesday, which was designed to prevent conference delegates entering the conference centre.

Hundreds of police and protesters clashed on Tuesday outside the conference, which left four officers injured and a protester hospitalised with leg injuries.

Around 50 arrests were made on Tuesday and Victoria Police continue to dedicate hundreds of officers to the protest as the conference continues until Thursday.

The International Mining and Resources Conference & Expo (IMARC) is where global mining leaders connect with technology, finance and the future. Now in its 6th year, it is Australia’s largest mining event, bringing together over 7,000 decision makers, mining leaders, policy makers, investors, commodity buyers, technical experts, innovators and educators from over 100 countries for four days of learning, deal-making and unparalleled networking. IMARC is developed in collaboration with its founding partners the Victorian State Government of Australia, Austmine, AusIMM and Mines and Money and is on now until 31 October at the Melbourne Convention & Exhibition Centre