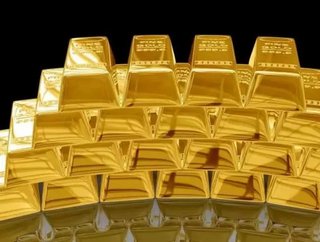 Whilegoldis synonymous with wealth, its astonishing how such a small amount of the yellow metal is worth so much. Thanks toDemonocracy.info, we can now...

While gold is synonymous with wealth, it’s astonishing how such a small amount of the yellow metal is worth so much. Thanks to Demonocracy.info, we can now see for ourselves the rarity of gold as shown through a series of 3D visualization of gold bullion bars.

• Related content: [PHOTOS] 5 of the most staggering facts about the Mponeng Gold Mine

Note: these visualization have gold pegged at $2,000 per ounce, which is currently not the case.

Gold is so heavy that the suspension of an average truck would break if it held anymore than pictured above. Even if the truck’s suspension broke, the load of gold in the back could buy 2,660 brand new trucks at an MSRP of $40,000 per truck.

Here’s 10 tons of gold compared to 100 tons of the yellow metal.

This semi-truck is carrying the maximum load it can legally carry, which is about about 25 tons. Here there are 24.88 tons of gold, worth $1.6 billion.

Here’s the entire gold reserves of the United States government, which is 8,133.5 tons.

Here’s the world’s gold reserves by government circa 2012. This is slightly outdated, with China and Russia both having significant increases since then.

All gold mined in history, stacked in 400 oz bars. The 166,500 tons here is actually divided into four levels: the bottom level is jewelry (50.5 percent of all gold), the 2nd level is private investment (18.7 percent), the third level is world governments (17.4 percent), and the highest level is other uses for gold such as industry (13.4 percent).

Lastly, we finish off with an image of all of the world’s mined gold in one cube with dimensions of 20.5m. If it was all melted, it would fit within the confines of an Olympic Swimming Pool.