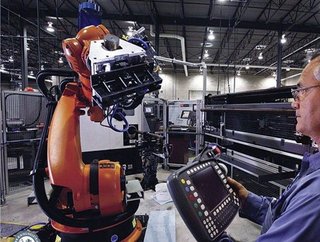 The concept of automated tunnel borers isn’t new. Since 2012, Rio Tinto has been working with the Centre of Excellence in Mining Innovation (CEMI) to build shafts and tunnels at a faster rate as part of Rio’s Mine of the Future initiative. Together, the two have designed a new tunnel boring system that is currently being implemented at Rio’s Northparkes Mine in Australia.

The future of autonomous boring is anticipated to be seen regularly in coming years.

In addition to eco-friendlier ways, the mining industry is pushing for newer and more improved methods for ore processing. One new process, which has the potential to be maximized across the mining sector, is Copper NuWave™.

Designed and implemented by Rio Tinto, the technology maximizes mineral recovery while reducing waste. It also has the ability to cut water and energy consumption. The company is currently testing the technology at its Kennecott Utah Copper mine in the U.S.

The use of mining equipment simulator systems is on the rise in recent months as companies utilize the innovative technology to train operators. The use of simulation technology has a wealth of advantages including aiding in recruitment processes, improvements in productivity and reaction times in emergency situations.

Within the next few years, the use of mining simulation technology could very well be utilized across the mining spectrum.

One of the more anticipated innovations for the mining industry is the revitalization of excavators. Companies like Volvo and Doosan are helping to make the excavator of the future bigger, smarter, safer and more powerful. Together, the two have designed some of the most futuristic concepts that could very well come to fruition in the next few years.

Rio Tinto is already working on commissioning the world’s first automated, long distance, heavy haul rail network for the mining industry, but it won’t be the last. The benefits of an automated rail system include enhanced safety and efficiency as mining companies can rely on the innovative technology to safely and securely transport minerals to their required destinations.

Already being utilized by a small group of mining companies, including diamond miner ALROSA, x-ray diffraction equipment is on path to become a global necessity. The equipment, which is currently used in diamond recovery, is an important method for the identification of phases in raw materials, for process control during ore beneficiation, and for the quality control of final mineral product.

3D mapping is another technological advancement that is expected to make a big splash in the mining industry within the next few years. Companies like Rio Tinto, which has already implemented the software at its West Angelas mine in Western Australia, are using the innovative technology for their advantage to improving the way they dig up commodities as well as cut cost.

Utilizing alternative energy is something most industries are working to implement on a larger scale. The mining sector is no different.

Harmony Gold has been on the forefront of using alternative energy, most notably solar. The company is working to use mine-impact land and tailings to pilot biocrop procreating in the form of giant king grass and sugar beets to generate natural gas as a fossil fuel substitute. The initiative could lead to more companies utilizing innovative sources for alternative energy.

Safety equipment in the mining industry has progress considerably in the last decade. As the sector moves towards automation, companies are implementing more advanced technology to secure employees remain as safe as possible.

At this year’s NSW Minerals Council Health and Safety Innovation award ceremony, the top honor for innovation went to Centennial Coal for their Fit-for-Purpose Underground Boot. The mining boot is designed to provide ankle support and sole stability, comfort and full prevention of water ingress.

Another safety innovation that has the potential to sweep the industry is SmartCap. The technology, which works to combat fatigue, utilizes sensors on the wearer’s forehead to monitor signs of fatigue and assess their level of alertness.

The number one mining innovation set to turn the industry upside down is autonomous mine site infrastructure.

Rio Tinto, which is the first company to envision the idea, has already launched initiatives towards its Mine of the Future. The three main components of mining include drilling, haulage trucks and long distance railway systems. Rio Tinto is working to automate all three in unison with operations. The system, which is set to be controlled by one main operational facility, will allow miners, ports and rail systems to be operated from a single location.