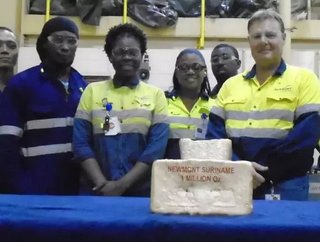 A gold mine in South America has hit a major milestone, as it officially crosses over the over million ounces mark. Newmont Mining announced in a state...

A gold mine in South America has hit a major milestone, as it officially crosses over the over million ounces mark.

Newmont Mining announced in a statement this week that, through its Newmont Suriname subsidiary, one million ounces of gold have been poured at the Merian gold mine in east Suriname.

This is a hugely significant milestone as commercial production had only officially commenced back in October 2016. The Merian gold mine is owned by Newmont Suriname (75%) and Staatsolie Maatschappij Suriname N.V., Suriname’s State-owned oil company (25%).

“This exciting milestone was achieved thanks to the hard work, commitment and skill of our employees and business partners,” said Albert Ramdin, Newmont’s Senior Director for External Relations in Suriname. “Our partnerships with the government, Staatsolie and local Pamaka communities form the foundation of the mine’s success and we look forward to many more years of safe, efficient and responsible gold production in Suriname.”

Newmont began operating the project in 2004 and began construction in August 2014. After a two-year construction phase, commercial production was achieved on October 1, 2016, on schedule and US$150mn under budget. Newmont’s total development capital investment was of US$525mn.