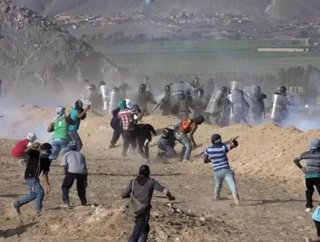 The government of Peru declared a state of emergency on Saturday, calling in national police and armed forces to maintain order as protests at the Tia M...

The government of Peru declared a state of emergency on Saturday, calling in national police and armed forces to maintain order as protests at the Tia Maria copper project turned violent.

According to CNN, one protester appeared to be dead from wounds to the head as others battled with police who lobbed tear gas at them.

The announcement follows almost two months of increasingly violent protests against the $1.4 billion copper mining project as oppositions fear the mine will pollute the environment and do very little for the local economy.

“We don’t want the mine,” said Enrique Torres Alvarez, an 85-year-old farmer attending a rally in Cocachacra’s main square. “It will ruin our land, and that will be the end of the farming.”

Development of Tia Maria, which is owned by Southern Copper, a subsidiary of Grupo Mexico, has been suspended since 2011 due to protests.

Earlier this month, Southern Copper CEO Oscar Gonzalez Rocha asked for all parties involved to "present their concerns and fears, identify solutions ... and define the responsibilities that all must assume in a reasonable timeframe."

However, it may be a little too late.

Problems from the beginning

This isn’t the first time one of Grupo Mexico’s projects has dealt with opposition from local communities.

It’s quite possible public perception played a significant role in the downfall of Tia Maria. The government of Peru may have also played a role in the violence.

In response to the protests, the government sent in more than 1,000 army troops to support the 4,000 police officers positioned to safeguard bridges, tunnels and highways. In addition, Peru’s Interior Minister authorized police to use firearms if they are attacked by protesters.

So far, three people have reportedly been killed, including one police officer, and more than 200 people have been wounded. According to many observers, the state’s response made things worst.

Carlos Galvez, president of the National Mining, Oil and Energy Society, a group representing mining companies said: “With this situation of violence, you can’t impose a project with force. You need to put cold water on the situation and calm things down.”

How it could have been avoided

Just like legal paperwork, engaging with local communities is imperative in order to move forward with any mining project.

Rolando Luque, the nation’s deputy ombudsman in charge of preventing social conflicts, told The Wall Street Journal that Southern Copper could have tamped down unrest by engaging more with the people of this region.

“Here moving ahead with the paperwork doesn’t always mean everything is settled,” Luque said. “Instead of relying on legal procedures, the company should have focused on the sociological, the economic, psychological and historical issues.”

The International Council of Mining and Metals (ICMM), an organization dedicated to improving sustainable development performance in the mining industry, has key principles in place for mining companies to avoid these types of situations.

“Engagement will begin at the earliest possible stage of potential mining activities, prior to substantive on-the-ground exploration. Engagement, wherever possible, will be undertaken through traditional authorities within communities and with respect for traditional decision-making structures and processes.

This includes any concerns that communities have about potentially negative impacts are understood and addressed by the company.

Another way the violence at Tia Maria could have been avoided is Grupo Mexico working with the government to stop the brutal military force directed at the residents who oppose the project.

All in all, many believe Grupo Mexico will scrap the project all together as the company appears tired of the ongoing protests and “anti-mining terrorism” in the area.