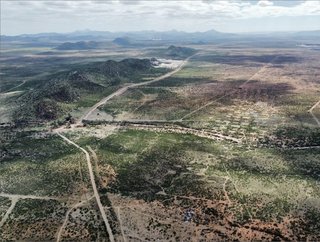 Osino Resources, the Canadian gold exploration and development company, has said that it has received ‘Preparedness to Grant’ confirmation from Namibia’s Ministry of Mines and Energy for the granting of a 20-year mining licence for its Twin Hills gold project in the Southern Africa country.

In a statement, Osino stated that the granting of the mining licence confirms Twin Hills’ position as a rapidly advancing, partially permitted, top-tier project in a premier jurisdiction.

It added that it had recently released a pre-feasibility study for Twin Hills, based on 2.15 Moz in reserves, outlining a 13-year open-pit mine life with an average annual gold production rate of 169koz per annum, at all-in sustaining costs of US$930/oz in the ten years of operation.

Heye Daun, Osino’s co-founder, President and CEO commented: “We are very pleased to have received confirmation from Namibia’s Ministry of Mines and Energy for the Preparedness to Grant of a 20-year mining licence for the Twin Hills Gold Project subject to the fulfilment of some remaining conditions which are customary under Namibia’s regulatory regime.

“Receipt of the mining licence is a major endorsement of the progress Osino has made with the advancement of the Twin Hills Gold Project and confirms the support of the Namibian government for the ongoing development of the project.

“Twin Hills’s stature as one of Namibia’s most exciting mining development projects continues to grow and we are very appreciative of the partnership shown by all Namibian permitting authorities throughout this process,” Daun added.

Osino’s statement added that their Mining License application was submitted to the Namibian Ministry of Mines and Energy in August 2021, and that it has been issued a Mining License subject to certain conditions.

These conditions include fulfilling an employment quota for certain disadvantaged Namibian groups; making available a 5% carried interest (not free-carried interest) by certain disadvantaged Namibian groups; issuance of the Environmental Clearance Certificate (ECC) by the Namibian Ministry of Environment, Fisheries and Tourism (MEFT); and finally, obtaining the remaining secondary permits to operate the mine.

“Osino is very pleased with the partnership shown by various Namibian permitting authorities to-date and is confident that it will fulfil the remaining conditions for the full grant of the Mining License in conjunction with the ongoing advancement of the project,” the statement said.

In conjunction with the mining licence application process, an Environmental and Social Impact Assessment (ESIA) was also completed, with the ESIA including full baseline specialist studies, and extensive stakeholder engagement, which took place during most of 2021 and early in 2022, the company said.

The completed ESIA and Environmental Management Plan (EMP) were submitted to the MEFT in March 2022, who reviewed the full impact assessment documentation and found no fatal flaws, it continued.

“The review and issuance of the ECC is in its final stages. One of the outstanding aspects is the conclusion of an appropriate engagement, documentation, and management process for the relocation of historic graves at the Twin Hills project site. Stakeholders have agreed to the relocation of the graves to a new site to be agreed upon.

“Osino is currently preparing to submit a final report to Namibia’s National Heritage Council (“NHC”) including recently completed stakeholder engagements and mitigation measures. Following this, the NHC is expected to submit its recommendation to the MEFT with respect to the issuance of the ECC for the Twin Hills project,” the company added.

With the Twin Hills project now rapidly progressing to the development phase, Osino’s project team is now engaging with the relevant Namibian line ministries for the necessary secondary site-specific licences needed, prior to entering the construction and operation phase.

These include the following:

Osino pointed out that it continues to adhere to Namibian due process and is working with all the relevant Namibian authorities for Twin Hills to be fully permitted as soon as possible, and well within the Project’s development timeframe.

Since the grassroots discovery of the wholly owned Twin Hills Gold Project in Central Namibia, the company has completed more than 220,000-metres of drilling and advanced technical studies on the Project, which culminated in the recently published Twin Hills PFS, it added.

“Osino has a commanding ground position of approximately 6,900sqkm located within Namibia’s prospective Damara sedimentary mineral belt, mostly in proximity to and along strike of the producing Navachab and Otjikoto Gold Mines. The Company is actively exploring a range of gold prospects and targets along the belt by utilising a portfolio approach geared towards discovery, targeting gold mineralisation that fits the broad orogenic gold model,” it concluded.