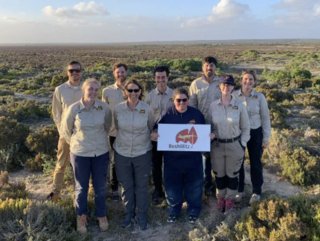 For 12 years, BHP has partnered with the Australian Government and Earthwatch Australia to deliver the programme, which supports species discovery and conservation efforts across states and aims to increase biodiversity knowledge.

To date, there have been 47 expeditions in all states and territories, with 17 of these having surveyed Indigenous-owned properties, including Kiwirrkurra IPA in Western Australia, and the Yalata Lands in South Australia.

During the pandemic, it has also attracted 81 'virtual expedition members', and made 203,728 observations and identified 12,639 species.

“The outcomes and discoveries made to-date are really telling to just how much remains unknown, and why this work is so important,” Stephen said.

Jo Harding, Bush Blitz Manager, said there has been a number of exciting discoveries made to date.

“Since it started, Bush Blitz has discovered more than 1800 new species and has added thousands of species records to what is already known, increasing our scientific knowledge to help us protect our biodiversity for generations to come,” she said.

The program is also future focused, empowering school teachers to develop scientific skills and inspire students. Under the TeachLive method, teachers use livestreams and blogs to bring the outback into the classroom.

“With Bush Blitz, we have empowered 62 TeachLive Fellows to inspire over 16,800 students to become environmental stewards,” she said.

The Australian company is seeking to place 30% of the land and water it owns, leases or manages under conservation, restoration or regenerative practices by 2030, according to a recent Financial Times report.