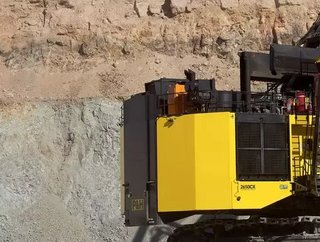 Komatsu’s latest P&H 2650CX hybrid shovel is being built at its Robinson copper mine in Nevada, aiming to meet sustainability and production targets

Labelled by the company as “an environmentally sustainable loading tool, helping miners to reduce fuel and greenhouse gas emissions while achieving their production targets”, Komatsu’s new hybrid mining shovel is being assembled at its Robinson copper mine in Nevada. The company’s P&H 2650CX hybrid shovel - a catchy name - is hoping to provide Komatsu with the means to raise its production capacity while simultaneously ensuring that the increase in its output doesn’t come at an environmental cost.

There’s no denying that it’s an impressive feat of manufacturing. The 2650CX hybrid shovel boasts a 59-tonne payload and is fuelled by a combination of diesel and electricity to reap the benefits of both electric mining and hydraulic excavation. Located at the White Pine County-based mine, the gargantuan tool is expected to streamline operational processes at the site and ensure its three large pits (Ruth, Tripp-Veteran, and Liberty) will eventually receive the operational benefits the 2650CX brings.

According to Komatsu, its sustainable shovel flaunts a variety of operational benefits including first multiple dig paths, possessing an impressive initial breakout force (thanks to the addition of an articulating clamshell bucket), and can deliver both high selectivity and flat floor clean-up. Digging requires less fuel - another additional benefit provided by the integration of the SR hybrid drive technology being able to harness regenerative power - and the model can stand proud as the more sustainable piece of machinery when compared to its architectural counterparts, ultimately making it more cost-effective to run.

Increased sustainability and reduced financial cost - what’s not to like?

Similarly, the shovel’s extended reach allows for a larger range for truck spotting, enables the potential for double side-loading, and ensures higher levels of safety due to the increased distance of the machine from the bank. An electric cable becomes a thing of the past thanks to the shovel’s latest twin diesel engines, and it’s expected to deliver up to a 15 per cent decrease in ownership cost in comparison to hydraulic excavators, and a further 25 per cent less operational fuel consumed overall.