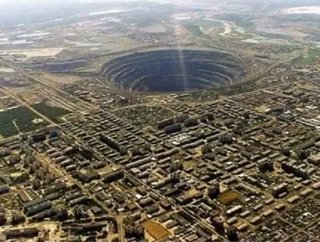 Russia revealed that it has a diamond field beneath a meteorite crater containing &ldquo;trillions of carats,&rdquo; the Christian Science Monitor rep...

Russia revealed that it has a diamond field beneath a meteorite crater containing “trillions of carats,” the Christian Science Monitor reported--large enough to supply the global market for another 3,000 years.

Although the discovery was made in the '70s, the Soviets have kept the great find declassified until now. With the USSR's huge diamond operations in Yakutia, which was already producing immense profits in a tightly controlled market, they didn't want to exploit it. Not to mention, the Soviets had already been heavily invested in producing a range of artificial diamonds.

“The resources of super-hard diamonds contained in rocks of the Popigai crypto-explosion structure are by a factor of ten bigger than the world’s all known reserves,” the Director of the Institute of Geology and Mineralogy at the Russian Academy of Sciences Nikolai Pokhilenko told the ITAR-TASS news agency.

SEE OTHER TOP STORIES IN THE ENERGY DIGITAL CONTENT NETWORK

These aren't exactly engagement ring diamonds, however. These gems are “super-hard,” or twice as difficult than other gems and have a different structure, ideal for scientific and industrial purposes.

Regardless, the new field is enough to completely reshape global diamond markets.

"The resources of super-hard diamonds contained in rocks of the Popigai crypto-explosion structure, are by a factor of ten bigger than the world's all known reserves," Nikolai Pokhilenko, director of the Novosibirsk Institute of Geology and Mineralogy, told ITAR-Tass. "We are speaking about trillions of carats. By comparison, present-day known reserves in Yakutia are estimated at one billion carats."

Since 2009, Russia has been the world's largest diamond producer, making it a main arbiter of global diamond prices, according to The New York Times. Today, it will have the monopoly on super-hard diamonds as well.