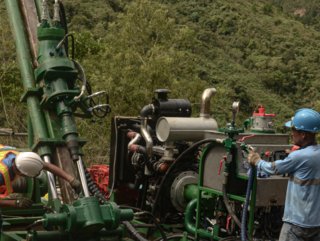 Celsius Resources, the copper and gold mining company with a portfolio of copper-gold assets in the Philippines and an advanced cobalt asset in Namibia, has announced that it has received further shallow and high-grade copper assay results from an ongoing drilling program at its flagship MCB copper-gold project, which is owned by the company’s Philippine subsidiary, Makilala Mining Company.

In a statement, Celsius said that the results continue to extend the envelope of the near surface mineralisation, which compliments previous drilling results from holes completed at MCB from 2021 to 2022.

Country Operations Director Peter Hume said: “Our drilling strategy was modified in 2022 to shift the focus from deep targets to the recently identified near surface higher-grade targets and it is starting to significantly pay off with better-than-expected results.”

The results from MCB-041 are particularly significant as they have allowed the near surface higher-grade copper mineralisation envelope to extend further to the east, the company added.

It pointed out that the location in general was previously only supported by one drill hole (MCB-010A). MCB-041 has significantly expanded the footprint of the near surface, higher-grade copper mineralisation at MCB, it continued.

“We expect these combined results will make a solid positive enhancement to the feasibility study which will commence in early 2023,” Hume stated.

Celsius said that its subsidiary, Makilala Mining Company, will continue to test the extents of the shallow copper mineralisation, with assay results pending for drill hole MCB-042. Furthermore, there has been a recent commencement on drill hole MCB-043.

The MCB Copper-Gold Project is located in the Cordillera Administrative Region in the Philippines, approximately 320-kilometres north of Manila. It is the flagship project within the Makilala portfolio which also contains other key prospects in the pipeline for permit renewal/extension, the statement said.

In addition, a scoping study for the MCB Project was announced on 1 December 2021, which identified the potential for the development of a copper-gold operation with a 25-year mine life. The scoping study was based on an underground mining operation and processing facility to produce a saleable copper-gold concentrate.

Some of the highlights included a post-tax NPV (8%) of US$464 million and IRR of 35%, assuming a copper price of US$4.00/lb and gold price of US$1,695/oz. Initial capital expenditure is estimated to be US$253 million, with a payback period of approximately 2.7 years.

The designed mine production is matched to a 2.28Mtpa processing plant which will treat ore with an estimated average grade of 1.14% copper and 0.54g/t gold for the first 10 years of planned production with a C1 cash costs at just US$0.73/lb copper, net gold credits, the statement concluded.