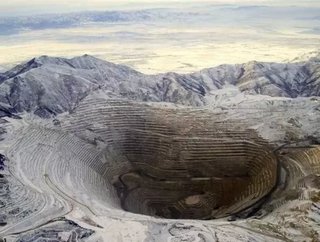 Mining company Rio Tinto s Bingham Canyon Mine, otherwise known as Kennecott Copper Mine, is one of the largest man-made holes in the world. Located out...

Mining company Rio Tinto’ s Bingham Canyon Mine, otherwise known as Kennecott Copper Mine, is one of the largest man-made holes in the world. Located outside of Salt Lake City, Utah, the copper mine has been in production since 1906 and produced more than 19 million tons of copper in its lifetime, including millions of ounces of gold, silver and molybdenum.

First discovered in 1848, the mine has built a mythical reputation for its gargantuan stature.

It measures roughly three miles wide and an astounding mile deep – that’s like two of the Willis Towers in Chicago on top of each other.

In 2001, the miner’s owner and operator, Rio Tinto, announced its closure at the end of 2013 due to declining copper prices.

But that wouldn’t be the end to the copper mine’s legacy. In an effort to capitalize on rising commodoity prices, Rio decided to continue the mine, building a second operation 2,000 feet underground. The mine currently supplies 18-25 percent of the United State's copper supply.

In April 2013, the Bingham Canyon Mine experienced a massive landslide, destroying 14 haul trucks, three shovel trucks and closing the mine’s main access ramp for seven months. It’s suggested the slide was likely the largest nonvolcanic slide in Northern American in the modern age.