Equinox Gold celebrates 5moz at Mesquite Mine in California 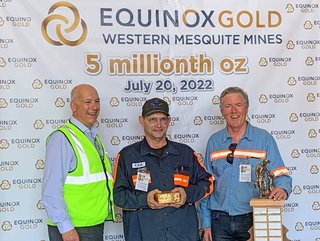 Equinox Gold Corp's Mesquite Mine poured its 5mnth ounce of gold on July 20.

Mesquite, which started operations in March 1986, is the largest gold mine in California.

Since the Canadian mining company acquired Mesquite on October 30, 2018, the mine has produced more than 450,000 ounces of gold.

Archuleta started his career at Mesquite in September 1985 and was part of the team when Mesquite poured its first ounce of gold. More than a quarter of the 300-person team has worked at the mine for more than 10 years.

Mesquite has completed more than 2,082 days and 4.3mn work hours without a lost-time incident, an outstanding achievement that showcases Mesquite's focus on teamwork and safety. Jessica Tiffin, Mesquite Safety Manager, who has worked at the mine since 2010, accepted the award.

At the end of May it received approval for the tailings storage facility raise at its RDM Mine in Brazil. The TSF raise contractor is mobilising equipment to begin the raise in early June, and full operations are expected to resume this month.