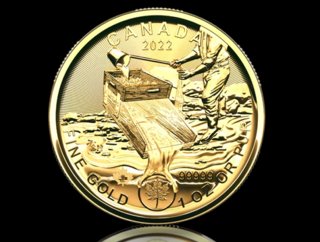 This new issue, illustrating the operation of a traditional sluice box, is the second coin in a series of 1 oz. 5-9s pure gold coins commemorating 'the last great gold rush' that forever transformed Canada, Yukon and the lives of the Indigenous people who have inhabited the land for millennia.

The bullion coin, made of the world's purest gold, was launched in Toronto, Ontario, at PDAC 2022, the mineral exploration and mining conference hosted by the Prospectors and Developers Association of Canada. It is on display at the Royal Canadian Mint booth and will soon be available through the Mint's network of official bullion distributors.

The reverse of the 2022 $200 1 oz. 99.999% Pure Gold Coin Klondike Gold Rush: Prospecting For Gold is designed by Canadian artist Steve Hepburn, who has illustrated a wooden sluice box in action, filled with "paydirt" from which precious gold flakes and nuggets are being carefully separated.

The background of the reverse and obverse features a precisely engraved array of radial lines that have become a defining characteristic of Mint bullion coins. The coin's security is also enhanced by the Mint's distinct micro-engraved maple leaf mintmark, showing the number 22 to correspond to its year of issue.

The latest 5-9s pure gold bullion coin is presented in credit card-style packaging that includes a certificate of purity signed by the Mint's Chief Assayer.

The Mint does not sell bullion directly to the public. Interested buyers are encouraged to contact a reputable bullion dealer.

To mark the 125th anniversary of the start of the Klondike Gold Rush, Royal Canadian Mint introduced commemorative $1 circulation coins highlighting the 1896 gold discovery in the traditional territory of the Tr’ondëk Hwëch’in.