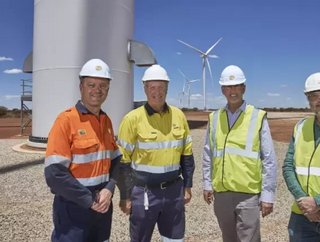 Australia’s largest hybrid renewable microgrid, and the first in the country to power a mine predominantly with wind-generated electricity, officially opened this month.

Constructed, owned and operated by global energy producer EDL, the 56MW microgrid powers Gold Fields’ Agnew Gold Mine with an average of 50–60% renewable energy, even achieving up to 85% in favourable weather conditions.

The Australian Renewable Energy Agency (ARENA) provided $13.5 million in funding to the project as part of its Advancing Renewables Program, and was represented at the opening by Shadow Minister for Planning; Lands; Heritage Neil Thomson.

EDL Chief Executive Officer James Harman said: “It is great to be officially opening the groundbreaking Agnew Hybrid Renewable Project with Gold Fields. The Project has showcased engineering excellence at every stage—from its ambitious inception, to its skilful design and innovative integration of five energy technologies, to the complex construction and commissioning, including overcoming some major issues during the project’s final stages, caused by the pandemic and bushfires.

“Credit must go to Gold Fields for its vision and belief that we would successfully deliver this complex project; and credit must go also to the entire project team, including EDL and all our contractors, who worked tirelessly to safely deliver the Agnew Hybrid Renewable Project on time and on budget.

“Since we completed the microgrid in May 2020, and pulled the switch, it has been powering Gold Fields’ Agnew Gold Mine with clean, reliable renewable energy. EDL’s hybrid renewable journey has not stopped with this landmark project. As the energy transition continues at pace, our ultimate goal is 100% renewables, and we look forward to continuing our work to make this a reality.”

Gold Fields Executive Vice President Australasia Stuart Mathews said his company is proud to have the opportunity to officially mark the delivery of its commitment to building a modern, sustainable hybrid renewable energy solution at the Agnew gold mine.

“This project is a testament to what can be achieved by taking courageous decisions and demonstrating true leadership in how we can sustainably energise our mines in remote environments. This is important to all of our stakeholders, including our employees, who want to see tangible outcomes in relation to our environmental, social and governance priorities and sustainability vision.

“With demonstrated success in construction and now operation, this project has provided a framework to take innovative energy solutions further across Gold Fields’ mine sites both in Australia and around the world.”

Minister Johnson congratulated Gold Fields and EDL on the completion of their award-winning project.

“I had the pleasure of visiting the completion of stage one of the project in 2019, when it was Australia’s first mine site to combine wind and solar power generation. The McGowan Government is supportive of mining and resources companies that are leading by example and embracing renewable energy solutions. This all contributes to our target of net zero carbon emissions by 2050.”

Meanwhile Magnetite Mines has submitted a formal application to ElectraNet for a proposed 132 kilovolt (kV) transmission line to be built from Robertstown to the project site in South Australia’s Braemar.

The line will reportedly carry a load of about 40MW to support the proposed 2.5Mtpa to 3Mtpa Stage 1 plant and mining operation and allows the project to connect to the National Electricity Market.

Magnetite Mines is aiming to leverage the connection to the grid and benefit from competitively priced, reliable grid electricity with a high renewable content. The company added that while about 70% renewable power is available now, the renewables intensity of the South Australian grid is forecast to be close to 100% when the project starts production.

Many of the largest miners in the world have been taking action by setting increasingly ambitious targets for their CO2 emissions.

Since 2020, BHP and Vale have been targeting a 30% reduction in Scope 1 and 2 emissions by 2030; Rio Tinto is targeting 15%. While these are a big step change for the industry, the targets for net-zero carbon emissions are much further out (2050 for most players).

Today 40-50% of CO2 emissions come from diesel used in mobile equipment, with another 30-35% from non-renewable electricity, according to McKinsey.

"Switching to a green source of electricity addresses between 30 and 50% of current emissions output and is a must if electrifying processes is the chosen path to decarbonisation," it states.