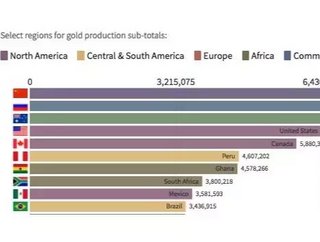 The world output of gold in 2019 has been analysed by London based mining and metals consultants Metals Focus and the World Gold Council...

World output of gold in 2019 showed its first decline in a decade, falling by 28 metric tonnes to 3,533 tonnes (or 113.6 million troy ounces). The decline followed consistent growth in primary gold production - 730 tonnes or 23.5m ounces since 2010, according to analysis London-based mining and metals consultants Metals Focus and the World Gold Council.

China is in danger of losing its no 1 ranking over the next few years – the country lost 20 tonnes of production while Russia added 34 tonnes or 1.1m ounces in a single year, shrinking the gap to 53.7 tonnes.

Russia overtook Australia in 2019 to take the number two spot, but the country also has an ambitious pipeline of new projects and like Russia, covid-19 did not impact production or project development significantly in 2020.

South Africa ranked number one in the world for a century before losing the top spot to China in 2007.

At its peak in the late 1960s, the gold fields of South Africa produced more than 1,000 tonnes, double the output of the rest of the world combined. Last year the country’s output fell to 130 tonnes, giving up its crown as top producer on the continent to Ghana.

Mexico's gold production has stayed relatively stable over the past decade. This somewhat contrasts with the fact that very few new mines have opened over the last few years, owing to a combination of an uncertain gold price environment and the mining companies’ focus on reducing costs.  More recent data that gives some insight into the impact of the pandemic on Mexican’s gold production. According to INEGI, gold production in Mexico increased to 6036 kg in August from 5798 kg in July of 2020.

South Africa - shrinking reserves, increased labour expenses and abrupt production stops have contributed to South Africa’s gold production decline. In 2006 South Africa led the world in gold production at 272MT annually. Reportedly, vast untapped resources are yet to be unearthed and the world’s deepest gold mine is located in Mponeng, South Africa. The operation is said to have produced upwards of half of all the gold in the world.

Ghana - while traditional companies and artisanal miners contributing to Ghana’s gold production, some of the largest include Kinross Gold (Chirano mine), Newmont Goldcorp (Akyem and Ahafo mines), AngloGold Ashanti (Obuasi and Iduapriem mines), Gold Fields (works the Tarkwa gold mine) and Asanko Gold (Asanko mine). The minerals mined in Ghana account for 37% of the country’s total exports, with gold comprising 90% of total mineral exports.

Peru has faced significant struggles with gold mining in the 21st century. Operations have increased 400% but many are located in the difficult terrain of the Peruvian mountain tops. The country has also sustained reported damage to natural resources in the Amazon and illegal mining remains a challenge. Peru is the 11th largest exporter of gold with exports valued in excess of $6bn.

Canada's mines produced an estimated 175 tonnes of gold in 2019, which is a 70% increase over gold production in 2010, but an 8.8% decrease compared to 2018. Many Canadian provinces saw the decommissioning of older gold mines in 2019. However, advanced exploration activities are underway... In 2019, mine production increased in Nunavut, Saskatchewan and Yukon, while production fell in Ontario, Quebec, British Columbia, Manitoba and the Atlantic provinces. Ontario and Quebec produced more than 75% of the gold mined in Canada in 2019.

United States - the majority of its gold originates from Nevada. The US maintains a massive supply of gold under lock and key in famed vaults such as its Fort Knox holding. The amount of US gold holdings reportedly equals to 75% of all other nations. The US also exports the most gold of any top 10 producers.

Australia - mines in Western Australia are responsible for around two-thirds of the nation's gold production. These operations are based out of Perth with the most productive open mining operations residing in the “Golden Mile” of Kalgoorlie-Boulder-Fimiston. The location has a strong concentration of gold and nickel reserves.

Russia has long had a close connection with gold, although one that has varied over many generations.
For example, the Gokhran of Russia (The State Repository of Precious Metals and Gemstones of the Russian Federation), now part of the Ministry of Finance of the Russian Federation, can trace its origins back to 1719, when Peter the Great, Emperor of Russia, established the country’s first State Treasury.

More recently, Russia has emerged as a major gold mining nation, while its central bank has built very substantial gold reserves of approximately 2,300 tonnes (t), representing over 20% of the total value of the country’s reserve assets.

China has become the world’s leading gold market over the past two decaded. As both the largest gold consumer and producer in the world, China plays a key role in the global gold market. But to many, the ancient eastern country’s gold market remains a mystery.